WHAT IS CAREER TECHNICAL EDUCATION?

Career Technical Education (CTE) is a program of study that involves a multiyear sequence of courses that integrate core academic knowledge with technical and occupational knowledge to provide students with a pathway to postsecondary education and careers.

CTE courses provide students of all ages with the academic and technical skills, knowledge and training necessary to succeed in future careers and to become lifelong learners.  At HBUHSD, we offer rigorous and relevant career and technical programs and pathways at all of our campuses that provide students the opportunity to learn skills that will serve them in a variety of post-secondary endeavors.  Our CTE classes are aligned with California’s CTE Model Curriculum Standards, and the pathways all focus on preparation for post-secondary success and connect core academic content with real-world applications. Additionally, most CTE courses also meet the University of California A-G subject requirements. 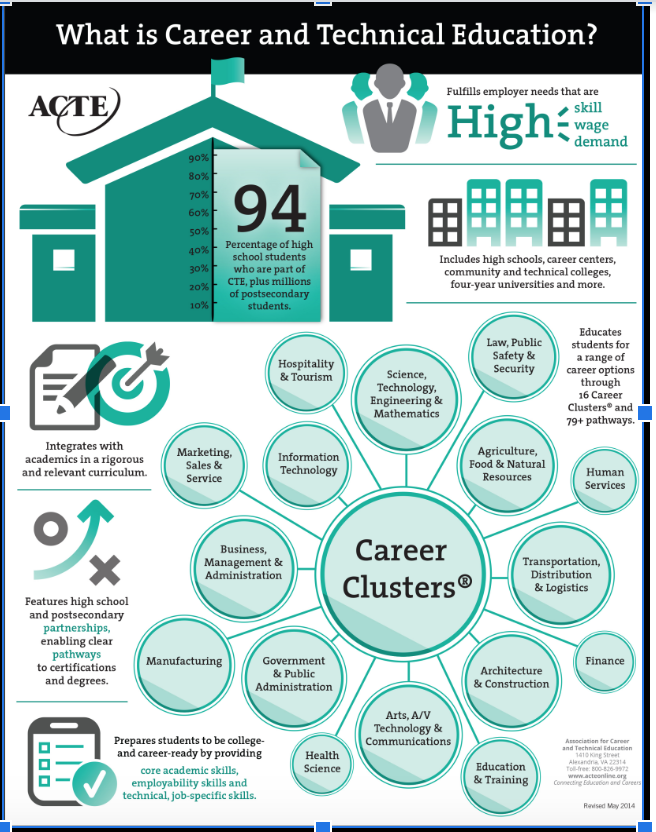 WHY CAREER TECHNICAL EDUCATION?
CTE promotes and supports high school programs in providing 21st century, academic and technical skills for ALL students. Whether you plan to go to work straight out of high school or eventually earn your doctoral degree, whether you have a clear career goal or just want to learn something practical and new, you can benefit from taking CTE classes at HBUHSD!
Some of the benefits of taking CTE courses include:

The state of California has identified 15 industry sectors and 58 industry pathways.  At HBUHSD, we offer 12 CTE Industry Sectors and 29 CTE Industry Pathways. Each sector contains multiple career pathways in which to develop a Course of Study. 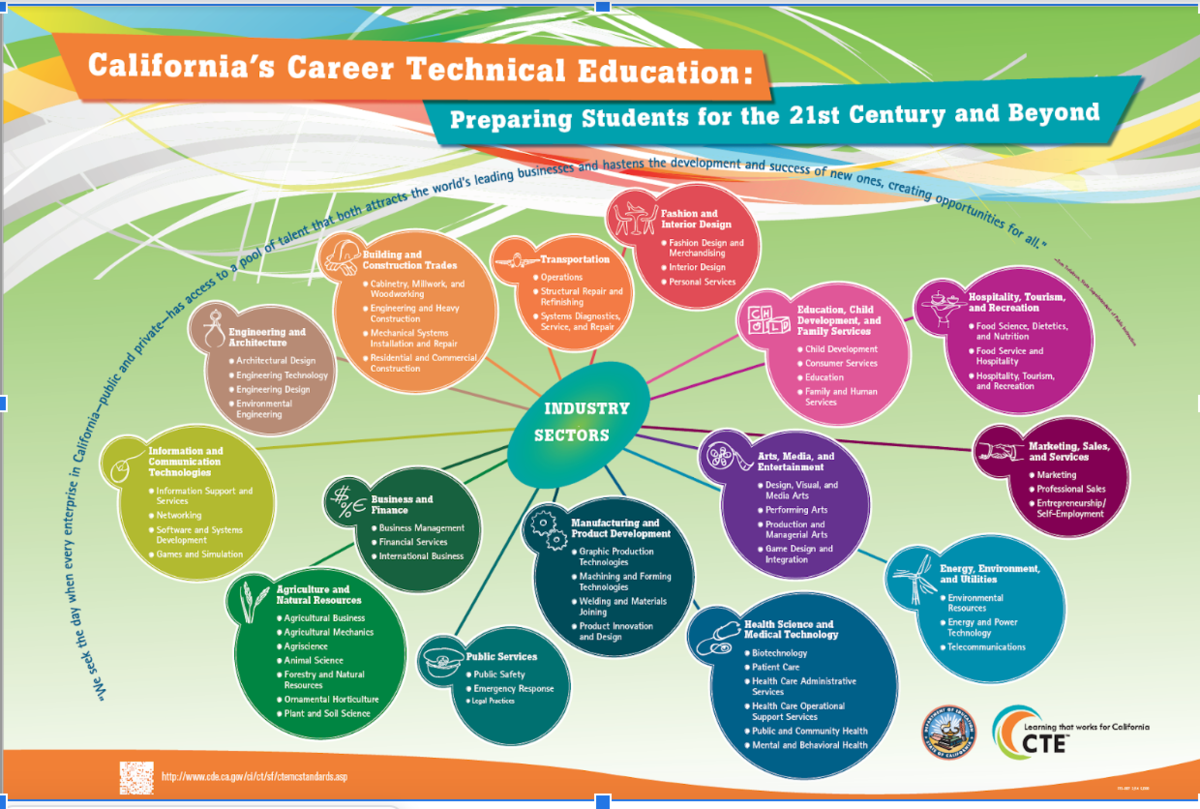 Education Code Section 51226 provides legal authority to develop CTE standards and frameworks. This legislation requires the development and adoption of CTE standards that incorporate the integration of career technical and academic education no later than June 1, 2005. The original CTE Model Curriculum Standards were adopted by the State Board of Education (SBE) on May 11, 2005. The standards, written for grades seven through twelve, specify learning goals in 58 career pathways organized around 15 industry sectors.

The California State Plan for Career Technical Education, A BRIDGE TO THE FUTURE 2008–2012, approved by the State Board of Education in May 2008, provides guidance for California’s CTE programs in California. The State Plan states, “CTE programs are dynamic; curricula need to stay current with rapid changes in the workplace, requiring ongoing updates and learning on the part of CTE faculty.” The adoption of the English Language Arts and Mathematics Common Core State Standards furthered the need to revise and align the CTE Standards with this new academic core.

Commencing in May 2011, 117 individuals representing secondary and post-secondary education and business and industry met to review the 2005 standards and make recommendations for improvement. Following the May 2011 meeting, industry sector meetings were held to develop the revised CTE standards based on the recommendations. Subsequently, the revised CTE Standards were shared with the general public for public review, comment, and suggestions. Once the CTE Standards were revised, academic and CTE teachers collaborated on the alignment with the Common Core State Standards, Next Generation Science Core Ideas, and the History/Social Science Standards.  The newly revised CTE Model Curriculum Standards designed to prepare students to be both Career and College ready were adopted by the SBE on January 16, 2013.

High School students at HBUHSD can get a jump start on post-secondary success by earning college credit through our partnership with Golden West College (GWC). Students enroll in a GWC course offered as part of a College and Career Access Pathways (CCAP) partnership agreement and the classes are taught either at a local high school campus or on GWC’s campus.  Classes taught at a high school are restricted and are only open to high school students. These courses are completely free for students, and students receive both high school and college credit. For more information, please visit the GWC College Credit Program.

COASTLINE REGIONAL OCCUPATIONAL PROGRAM (ROP)
Coastline ROP is a dynamic educational organization that inspires students to achieve their goals – both in academics and careers.  For more information about Coastline ROP, click here or visit the website at www.coastlinerop.net.

Discover the careers that fit your interests! Take one or more of the following career quizzes for FREE!