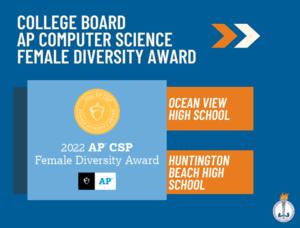 The popularity of AP Computer Science Principles is on the rise amongst all students, including female students. In 2022, the number of students who took the AP CSP Exam (134,651) had tripled from the number of exam takers in the course’s first year in 2017. 44,811 women accounted for the AP CSP Exam test takers in 2022, which was also three times the number of females who tested in 2017. Because of OVHS’s and HBHS’s dedication to their computer science programs and commitment to their students, OVHS and HBHS were two of 832 recognized in the category of AP Computer Science Principles (CSP).

Owen Crosby, Ed.D., Huntington Beach Union High School District’s Assistant Superintendent of Educational Services, states, “The growth of the AP Computer Science Principles programs at Huntington Beach and Ocean View is a direct result of a strong belief that all students can achieve and excel. It is great to see so many young women across our district challenging themselves at the highest levels and succeeding. HBUHSD is proud to have teachers and staff across the district who encourage all students to pursue their interests and passions.”

Schools like OVHS, HBHS, and other schools that have won the AP Computer Science Female Diversity Award serve as inspirations and models for high schools across the nation. They play an important role in emphasizing the importance of creating inclusive, diverse classrooms that set all students up for future success.

The Huntington Beach Union High School District is extremely proud of both Ocean View High School and Huntington Beach High School for receiving this award. The College Board AP® Computer Science Female Diversity Award is a great accomplishment for HBUHSD schools and a true testament to the dedication these schools have for their students.