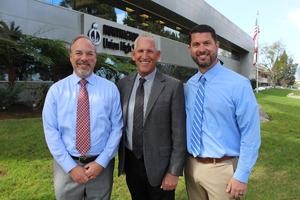 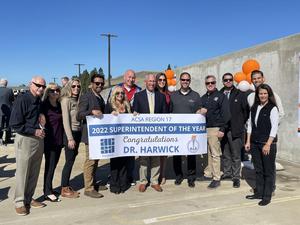 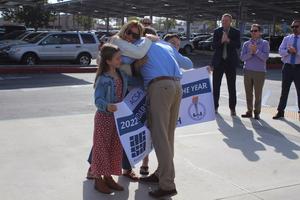 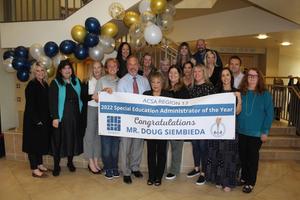 For the first time in history, ACSA nominates three leaders from the same school district for their Administrators of the Year & Friends of Education awards.

Established in 1971, ACSA is the largest umbrella organization for school leaders in the U.S., serving more than 17,000 California educators. The organization annually spotlights students, administrators, and community organizations for their achievements and dedication to public education at both regional and state levels.


The Huntington Beach Union High School District is thrilled to announce that ACSA has chosen to honor three administrators for their 2022 recognitions. Congratulations are in order for Dr. Clint Harwick, Superintendent of the Year, Mr. Doug Siembieda, Special Education Administrator of the Year, and Dr. Morgan Smith, Secondary Principal of the Year.


Each administrator was surprised with a celebration surrounded by not only their colleagues, but also by students, families, and friends. Dr. Clint Harwick has led HBUHSD as the Superintendent since 2017. With his well-rounded experience and natural ability to connect with others, he has exemplified what it means to be a leader and a learner. His positive attitude permeates through the district’s staff and students. “It is a true honor to be named one of the Administrators of the Year, alongside such outstanding colleagues as Principal Morgan Smith and Special Education Director Doug Siembieda,” said Dr. Harwick. “We are blessed to work for such a dedicated educational family in HBUHSD while investing in our greatest community asset, our students.”

Mr. Doug Siembieda has been the Executive Director of Special Education at the Huntington Beach Union High School District for nine years. He has led his team with integrity and acts as a mentor to his colleagues and staff, supporting them in their endeavors and investing time into each one of them. The driving force behind his work, however, are the students. He never waivers on advocating for what is best for a student. Mr. Siembieda believes that every child is equal and every child deserves a chance. Dr. Morgan Smith started as the principal of Fountain Valley High School in 2015, where he made many great improvements to the school and its culture. His priority to learn each students’ name, face, and story, has made a large campus feel like a tightly knit family. Now, Dr. Smith is embracing the opportunity to lead Marina High School for the 2021-2022 school year. He continues to display excellency and impress students, parents, and staff alike. Dr. Smith’s commitment to HBUHSD has made him a well-respected leader and beloved principal. HBUHSD’s three administrators, along with others in their categories, will move forward to be considered by ACSA’s Statewide Awards Committee for recognition at the state level.

Dr. Clint Harwick, Mr. Doug Siembieda, and Dr. Morgan Smith will be honored on May 9th during Region 17’s Administrator of the Year Celebration of Excellence dinner, located at the Irvine Marriott. The Huntington Beach Union High School District is honored to have such outstanding leaders representing our schools, our staff, and our community.